Cloverleaf HS One Act Play Festival - May 16 at 4 p.m. at CES Stage

After taking a year off, the Cloverleaf High School Drama Department announces the return of its 2021 One Act Play Festival on Sunday, May 16, at 4 p.m. on the Cloverleaf Elementary School stage.
As has been the case with the other CHS Drama Club productions this year, there will be limited tickets, and masks and social distancing will be required for all audience members.

This year’s festival includes three one-act plays under the direction of the advisors from the CHS and CMS Drama Clubs.

“We are excited to have some more live theater this school year in a safe environment,” said CHS Drama Club advisor John Carmigiano.

“The one acts are a great way for students to get more stage experience, and we are happy they will have an opportunity to shine again this year.”

The first play will be “12 Angry Pigs” by Wade Bradford, and directed by CMS Drama Club Advisor Mary Augustus. In this comedy, a takeoff of 12 Angry Jurors, the jury of pigs will decide the fate of a big, bad wolf along with some twists that the audience will never see coming.  The play was casted with Cloverleaf Middle School acting students.

“I love working with Cloverleaf Drama students and being part of their fine arts experience,” Augustus said.  “Acting not only allows students to express themselves and explore varying emotions and experiences, but it also increases students' exposure to literature. Students are provided with a welcoming environment in which they are free to be themselves. Everyone has an opportunity to succeed in Drama Club!”

The second play of the night will be “This is a Test” by Stephen Gregg, and directed by CHS Drama Club Co-Advisor Tori Krus, and assisted by Cloverleaf High School staff member Scott Bell.  The play centers around a student’s big test and the nightmare playing out in the classroom.  It is a comedy, and one that all students can relate to when the pressure is on and the stakes are high.

“Working on the one act play has been so much fun!” Krus said. “There's a lot more freedom for the students to get creative and show off their stuff in this festival, and that's really fun!”

The third play will be “A Game” by Dennis E. Noble, and directed by Carmigiano.  This will be the senior show for the three Cloverleaf seniors who will be headed off to college after graduation.  The show is a nationally known one-act play competition piece and was selected by senior Emily Winnicki.

“I fell in love with his play as soon as I read it,” Winnicki said. “It seems very silly when you first start reading it. Then the more you get into it, the more you realize the darker message behind the show.”

Just a warning: They are some deep overtones in the play, and some suggested violence and mature themes. “A Game” is a farce that turns into a very serious look at the world we live in where people can fall victim to hate, and become enemies, without even realizing it.

“The mood shift in the play is most alarming as it starts out very simply with an experiment about to begin, and turns into anything but a simple one,” Carmigiano said.  “It’s nice to have the opportunity to direct these three seniors one last time, and this piece by Noble definitely challenges their abilities as actors like nothing else they have done before.”

Emily Pamer, one of the seniors, is happy to have the opportunity to share the stage one more time in high school with her close friends.

“I cannot explain how happy I am to be able to act in one last production with some of my favorite people in drama,” Pamer said.  “I have spent countless hours with these lovely people over the past four years and I love that I get to work with them one last time.”

Senior Brenna Holliday has learned a lot from her theatre experiences in high school.

“Drama has taught me how to set and achieve small goals to help reach one big goal,” Holliday said.

Winnicki had her own take on what the Drama Club and acting experiences have meant to her.

“Drama has taught me to be confident in myself and that it is okay to be different,” Winnicki said. “It has also taught me to be more empathetic. By playing different characters, you learn about different people's struggles.”

Admission is $5 and tickets must be purchased ahead of time on Local Level that can be found on www.cloverleaflocal.org. The house will open on May 16 starting at 3:30 p.m.

If you have any questions, please feel free to contact John Carmigiano at [email protected] 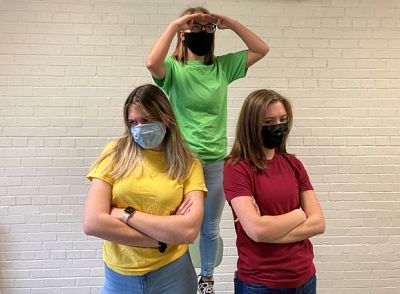